Flipping through the 1920 edition of House & Garden’s Second Book of Interiors, I passed many handsome rooms, most of which betrayed their time and place—typical Long Island country house drawing rooms, all correctly Georgian, stockbroker Tudor libraries, and Colonial Dining rooms.   Suddenly, the room above jumped out at me, and demanded a closer look.  It was something more unusual, rich, yet looser and more imaginative after the acres of floral cretonne and hooked rugs of most of the book.  Here was something bolder—a bedroom with drawing room pretensions—the furniture well chosen, loose and sparely arranged in the vaulted ceilinged space, long French windows, curtains freely draped, facing each other on two sides.  Old black and white photograph is deceptive.  My first instinct was that the room was likely in traditional Chinese export color schemes—all celadon and rose.   The bold Tibetan tiger rug should have clued me otherwise.  The caption describes something far more dramatic for this room

Okay, that got my attention.  I googled Mr. Thomas—the house was called Huntland (click HERE and HERE for more), and he himself was prominent in the foxhunting world in the land of silver stirrup cups and good English furniture.  How he came to have interiors of such imagination, or who did them for him, eluded me, but clearly he was a guy with some dash.

The room seems to be missing from the history of Chinoiserie  in America in the 20th century, which includes the Chinese Room at Beauport, not published by House & Garden until eight years after the Thomas Room.

Or Conde Nast’s ballroom, decorated by Elsie de Wolfe, with its famous set of Chinese papers from Beaudesert, an Anglesey family house in England

And of course, the Chinese drawing room of 1930 at Henry DuPont’s Winterthur House, whose wallpaper came from the same set as that in the Chinese room in Beauport.  The DuPont room is seen below in a stereoview as it appeared when the family lived there, from the Winterthur Digital Archives.

I was tempted to veer off to Middleburg with more about the Thomas house, but instead decided to contemplate some the bedroom’s spiritual descendants, such as Pauline de Rothschild’s Chinoiserie bedroom at Chateau Mouton, as famously photographed by Horst for Vogue, below.

Or Nancy Lancaster’s famous bedroom at Haseley Court.   One is tempted to wonder whether Mrs. Lancaster, in her own Virginia foxhunting days as Mrs. Field and later Mrs. Tree, had ever visited Huntlands and seen the glamorous Thomas bedroom.  Certainly her famous bedroom there, despite stylistic differences has much in common.

Last but not least, the longer I looked at the Thomas room, the more familiar the bed became.  And sure enough it is apparently the same bed for which Doris Duke paid $400.00  at a shop called The Flea Market in 1942, sold for many times that ($20,000 to be exact) at the 2004 Christies auction of her effects.

UPDATE: Perhaps I should have followed through on Joseph B. Thomas after all, for had I thought about it a moment longer—or not been so focused on dramatic bedrooms, the lightbulb would have gone off and I would have realized that he was the same Joseph B. Thomas who developed River House in New York, possibly the city’s most glamorous apartment building, and who was married to Wells Fargo heiress and muralist Clara Fargo Thomas, whose house up here is one of the epochal houses of the 1930’s, and which I blogged about HERE

From Elsie deWolfe, who gave us such deathless design advice as “I believe in plenty of optimism and white paint”, came this design for a house in the ‘Modern Regency’ style in 1926.  It was published in Arts & Decoration, and appears to have been a promotional gimmick, much like the “House of Tomorrow” or “Idea House” spreads that one reads in today’s magazines, with lots of cross-promotional ads. Whatever the intent, it presages the style so beloved of Hollywood moguls for the next 2 decades.

One suspects that the future Lady Mendl did not actually do the architectural design, nor the professional looking sketches–or maybe she did, for the plan is very eccentric.

Beyond that, I know nothing more about it.  You heard it here. 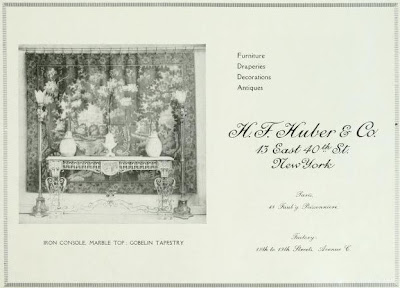 These advertisements for interior decorators date from the 1910’s, in the nascent years of the profession.  Some of the names resonate today, others are long forgotten. 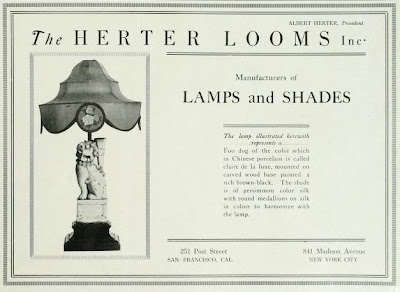 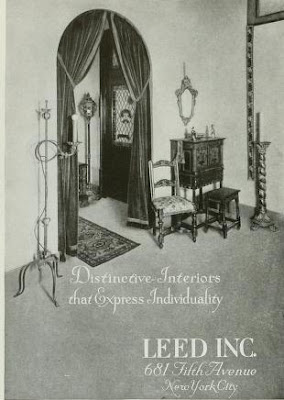 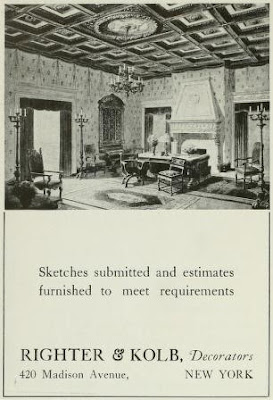 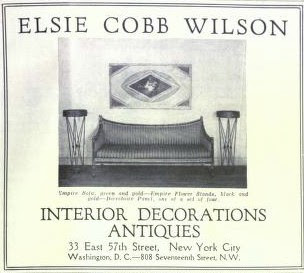 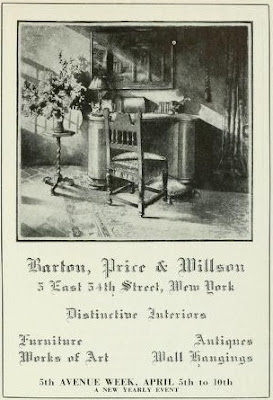 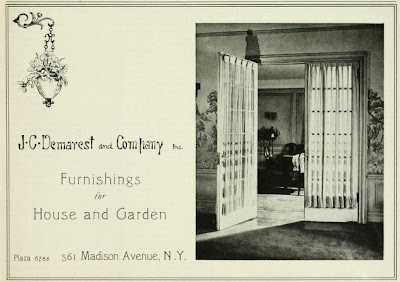 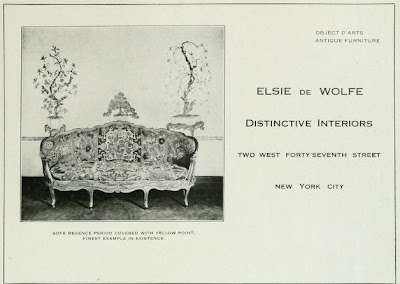 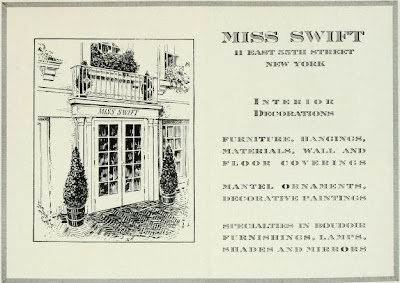 And here’s one of them, from House & Garden for November, 1917 in the Long Island house of Ormond Smith.  The chic Godmother of Interior Decoration, who brought light and trellis to American interiors, is here seen in a moment of overstuffed, overwrought, and over furnished frenzy.  And what’s with the matchy-matchy going on with the light fixtures, rugs and little table in foreground all borrowing from the elegant trellis frieze.  I’d be voting this one off Top Design in the first round.