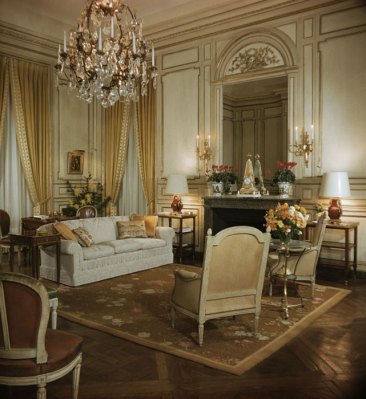 The drawing room of a friend’s apartment in the Pulitzer mansion, as decorated for him by Natalie Davenport of McMillen, Inc. in the 1960’s
I continue to rummage through my old clip files, revisiting favorite sites, remembering old friends.  Yesterday, I found one about a singular apartment in New York’s Pulitzer mansion, created by a kind friend many years ago.

While at Yale, he had considered studying architecture, but felt he lacked the math— he was passionate about houses and decoration—as well as music, but that is outside the scope of this post.   Throughout his lifetime, he made many contractors, real estate brokers, architects and decorators very happy.  I believe that there were over 30 houses and apartments over the years, usually two at a time.  The decorating firm of McMillen alone handled 17 commissions for him.  There were at least five by the brilliant modernist master Ben Baldwin. 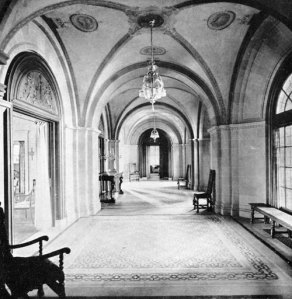 Main Hall of the Hoyt cottage in Southampton
He had been brought up in grand surroundings.  In summer, his parents occupied the palatially scaled former  Hoyt estate in Southampton,  Winters vacations were spent in Palm Beach.  His father, to make work for the unemployed during the depression, had bought the Tiffany Mansion on Madison Avenue, and demolished it in favor of an elegant apartment building, the first built in New York since the crash of ’29, and and also considered the last great  pre-war building.  The architects were Rosario Candela and Mott Schmidt, and the family occupied a 21 room duplex on the top floors.  It was during this process that his passion for his surroundings were formed.
After his parents died, he inherited a large collection of fine English portraits and Georgian furniture typical of the rich Anglophiliiac taste of the day.  The collection, even after division with two siblings, amply furnished his apartments in New York, including a handsome duplex on Fifth Avenue just downstairs from a young couple named Von Bulow. 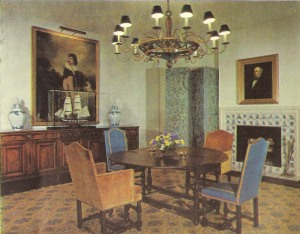 His parent’s Romney portrait, as seen in the dining room of his former wife’s apartment on Park Avenue, also by McMillen
After a divorce, his parent’s Gainsboroughs, Romneys and Raeburns went to his former wife’s apartment on Park Avenue, and our friend, giving outlet  to his taste for something French, bought an apartment  formed from the former soundproofed bedroom suite of Joseph Pulitzer, on the second floor of the publisher’s former mansion by McKim, Mead, & White on East 73rd St.  Measuring 26 x 36, the beautifully proportioned main room was what particularly caught our friend’s eye, large enough for his Boesendorfer grand, and for entertaining for the various good causes he supported. 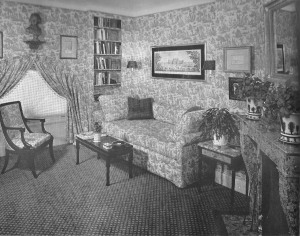 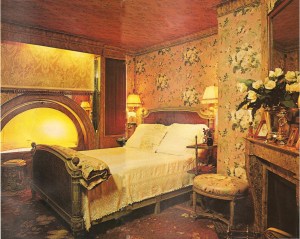 The mezzanine bedroom in the Pulitzer house apartment, as done for our friend by McMillen (top), and for the next owner by Denning & Fourcade (bottom)

Finding the McKim, Mead and White interior not to his taste, he commissioned his decorator, Natalie Davenport of McMillen, to find an 18th century boiserie in France.  Once located, it was brought to this country, along with French craftsman to install it.  Then the fun of furnishing began.  These rooms were as far from the age of Aquarius, then dawning,  as the best upholsterers and painters in New York could make them. When finished, it was the ne plus ultra of the rich taste of the era, recalling the apartment, also by McMillen, for the Henry Fords, and the Wrightsman rooms at the Metropolitan Museum, which were then being decorated by Jansen of Paris, who also supplied many of the modern furnishing pieces used in this commission. 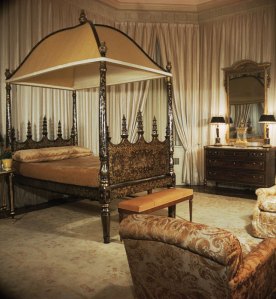 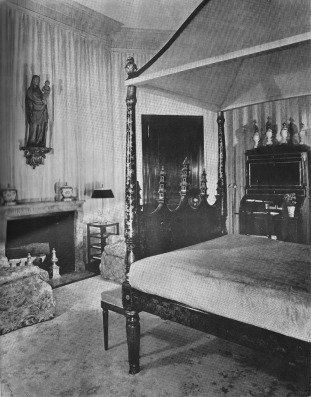 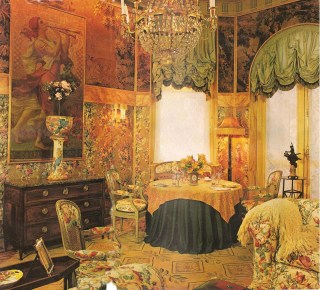 The octagon room, as decorated for our friend by McMillen, above,
and Denning and Fourcade’s version for the new owner, below

The octagonal room was hung with silk of an indescribable shade of pale peach, and was centered on the most extraordinary lacquered bed imaginable, supposedly made for the Brighton Pavilion, an attribution shared with almost all Chinoiserie furniture of the early 19th century. 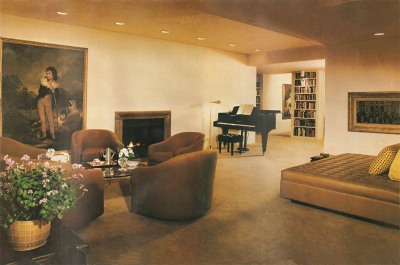 His parent’s Romney, as seen two or three moves later in our friend’s new apartment by Benjamin Baldwin

Needless to say, our friend grew architecturally restless, leaving the Pulitzer apartment for awhile, trying out two modern apartments on 5th Avenue, a summer house in Connecticut, another in Maine, a small chateau in France, then moved back to the Pulitzer House apartment which he’d kept through it all.  He then resolutely switched to modern, eventually winding up in a sublimely reductionist apartment nearby, with interiors not by McMillen, but by modernist master Benjamin Baldwin.  Here, after his former wife’s death, his parent’s English portraits also came to roost. 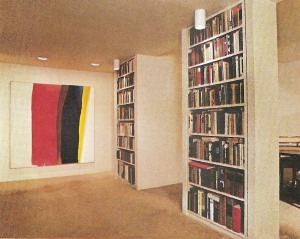 The library of the new apartment.  Two more moves later, the Cleve Gray was taken to a new summer house in Maine.
The story of the Louis XVI drawing room doesn’t end here, however, nor does that of the bed.  The Pulitzer house apartment changed hands, and the new owner, also a philanthropist and arts patron, desiring something cosier, brought in Denning and Fourcade, who brought in  their signature mix of densely patterned rich fabrics, and, while keeping the McMillen curtains, refashioned it as an interior in Le Style Rothschild, redolent of the fin de siecle.  The former bedroom, now a dining room, was a particular horror. 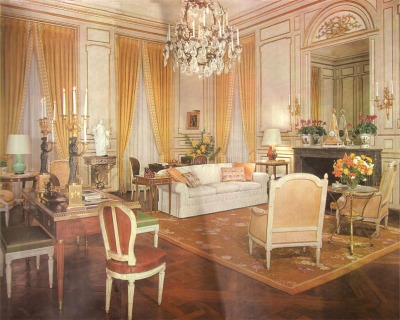 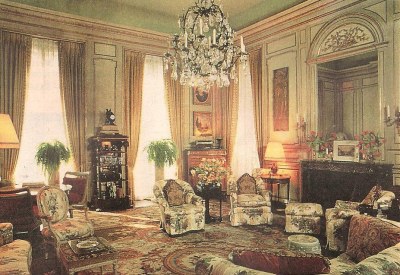 After a few years, the new owner wearied of this heavy opulence (I myself would last about 3.2 seconds in a Denning & Fourcade interior before I’d have to be taken, screaming,  to a monastic retreat to sooth my shattered nerves).  In 1986, Patrick Naggar was called in, degilded the boisierie, hung new  curtains, and gave the room a luxe French Moderne touch. 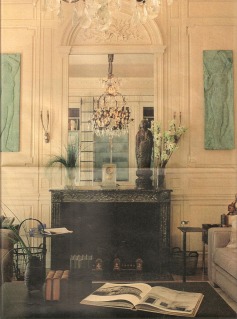 The drawing room, in its post Denning and Fourcade mode. The chandelier remains the same
As for the Prince Regent’s lacquer bed, it followed our friend, sans canopy due to lower ceilings, to  a country house in Connecticut, and another apartment on Fifth Avenue, before being sold to another royal, Mario Buatta, the Prince of Chintz, who I believe sleeps in it to this day. 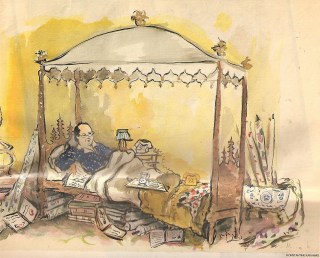 Mario Buatta, at work in the lacquer bed, de-accessioned by our friend.