I wonder why ‘Mizzentop’, a grand Bar Harbor summer cottage built in 1883 for Sarah Hunt, widow of artist William Hunt, was not designed by her brother-in-law, William Morris Hunt, but rather H.L. Putnam of Boston.
There is much more to write about Mizzentop, which went on to have a distinguished list of tenants and owners, and when I do, I will tie it to the invention of the reaper, to one of the finest metalworkers of the early 1900’s, the Titanic,  the decorating firm of Sills and Huniford (no, they did not do interiors of this house, which burned before they were born), and even the TV show Law & Order, but not right now.  I was just wondering out loud for the moment.  I wish I were closer to the AIA Library, which houses the Hunt papers.   One would love to imagine that maybe there is a letter from Hunt to his sister-in-law, regretting that he was unable to take time off from the Vanderbilts, but recommending Mr. Putnam.  More likely however, Mr. Putnam was part of Mrs. Hunt’s social circle in Boston.

Another curiousity is that there is a little cottage in Bar Harbor, know as ‘Mizzentop Cottage’.  It is claimed to be the laundry cottage of Mizzentop, moved from the site to an intown location and converted to residential use in the 1930s.  Yet, it is almost identical to the laundry cottage at ‘Blair Eyrie’, further up the hill from Mizzentop, and in a 1940s real estate ad, the laundry building at Mizzentop is still listed as on site and containing six additional staff bedrooms.  As it happens, ‘Blair Eyrie’ was demolished in, you guessed it, the 1930s, and its laundry house was trucked off to a new location.  Research is a constant struggle to separate truth and conflicting, often romantic or apocryphal fiction.  Which is why real estate brokers are able to sell so many houses designed by Stanford White years after his death, and why so many families own sideboards made in the 1830s, but with a firm family story of having been given to an ancestor by George Washington, despite his having died years before.

Blair Eyrie was built at the highest elevation of any cottage in Bar Harbor, with 360 degree views, and never was a laundry building more prettily situated.  Below are the stairs that led to garden level from the laundry cottage.  Picturesque though these steps are, one does not envy the laundry staff making the trek from the house, down the service drive at right, and then down these steps with full baskets of laundry. 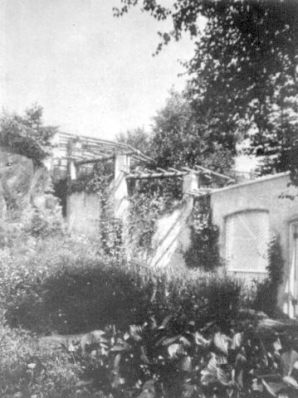 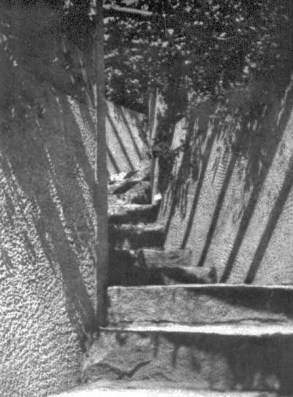 9 thoughts on “I WONDER WHY–SOME PERILS OF RESEARCH”