For almost the entire 400 years since the White Anglo Saxon Protestants took New England from its rightful owners, its houses have been restless and on the move.  The first settlers were constantly moving buildings.  During the Revolution residents of Castine, Maine who preferred the rule of a mad king took their houses apart, loaded them on boats, and removed houses and selves to St. Andrews in New Brunswick.  In 1845, Elizabeth Prince Peabody described a house moving she witnessed in Danvers, Massachusetts. “The building came along slowly, drawn by yokes of oxen. Every yoke had a driver beside it with goads, hurrying them with a ‘Hush-whoa’. It seemed as though there were 20 or 40 yoke of oxen.” 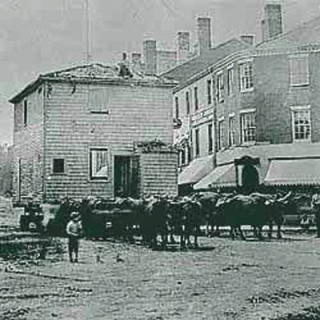 House moving in Newburyport Massachusetts. (Historic New England)
In our Maine village, a number of early buildings are not in their original locations.  My own house, a small cape style farmhouse built in 1814, became redundant when the family that owned it hired noted architect William Ralph Emerson to design a new house in 1895.  Finding my house too good for tear down (I’ve since expensively had reason to question their judgment call), they simply lifted it up, put it on logs, hooked it up to some oxen, and rolled it downhill about a thousand feet, and here I sit, in a draft, typing this post.  I love the stories of these restless houses, and in the next few weeks will tell the tales of four of the best.

Phippsburg, Maine, in the late 19th century.  The two McCobb houses are at the center of the picture

Coastal dwellers and boatmen looking out to sea in mid-coast Maine in 1925 might well have rubbed their eyes in disbelief at the surprising sight of a tall stately house floating by on the horizon.  This is the story of what they saw:

Spite House en route (Down East Magazine, uncredited, August 1960)
The 1806 Thomas McCobb house in Phippsburg, at the mouth of the Kennebec River, was known locally as ‘the spite house’.   It is a particularly elegant Federal style house, with details taken from Asher Benjamin, an octagonal cupola, and carved swags above the first floor windows.  The local legend was that Captain Thomas McCobb built it to spite his mother and stepbrother, who, with manipulation, had inherited the family homestead across the road, until then the finest house in the region.

Spite House is loaded onto the barge at Phippsburg (Down East)
Spite house remained on its knoll, overshadowing the older house, until discovered by Donald Dodge of Philadelphia.  Smitten, he negotiated a purchase, and arrangements were made to move the house to his ocean front site on Deadman’s Point up the coast. The Dresser Company of Portland was hired, the house was loaded on greased skids, rolled downhill and loaded onto a New York, New Haven and Hartford Railroad barge captained by John Snow, and the house was taken 85 miles by sea to its new location overlooking Penobscot Bay.  Mr. Dodge wished the house to be moved without damage to plaster or chimneys, and over 2,000 feet of lumber was used to brace  the structure for safe transport. Adding to the load were several tons of granite, including the original doorsteps and foundation coping.  Upon arrival at its new site, the process was reversed, the house was loaded back on skids, and horses drew it to the new foundations awaiting it. 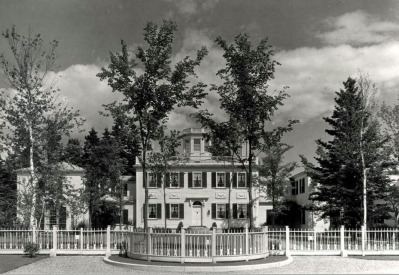 Spite House in its new location, greatly enlarged by three wings (Down East)
While Spite House, as it was dubbed, may have been the grandest house in Phippsburg a hundred years before, its 8 rooms were hardly adequate for the needs of a wealthy family and their staff as a summer home in the age of F. Scott Fitzgerald.  The venerable Philadelphia firm of Tilden, Register, and Pepper, headed by Marmaduke Tilden, were brought in for a ‘restoration’ and enlargement of the house, giving it a glamorous ‘past’ that probably far exceeded the original. 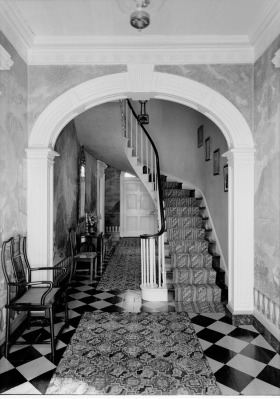 The formality of the grisaille scenic wallpaper in the hall was offset by painted wooden floors and colorful early American hooked rugs (Cervin Robinson photograph, HABS)

The curving main stairway was reversed, a back stair removed, and the hall extended through the house, that the ocean might be seen from the front door.  Wings were added to the sides with large living and dining rooms, a gun room, ladies reception room, dressing rooms, bathrooms,, and an extensive service wing with the usual assortment of kitchens, pantries and servants rooms.  For more old material, an 18th century house in Harpswell was purchased and demolished for woodwork for several rooms, including a paneled breakfast room.  Mr. Dodge was a connoisseur of singular and bold taste, and he furnished the house fearlessly in the best Colonial Revival idiom of the day.

Woodwork was carefully glazed to appear antiqued.  Fragments of original wallpapers were reproduced in their original bright colors.  One room was papered in an orange swag pattern paper, with orange and green drapery to match.  Painted floors and bright hooked rugs contrasted with the elegant furnishings.

The new dining room, with woodwork copied from the similar Kavanaugh house in Damariscotta Mills, was particularly fearless.  It featured a scenic wallpaper in blues with accents of red and orange, and the carpet was a Brussels woven in blues and oranges, for which Mr. Dodge had the original factory re-opened.  Each room, like Henry Davis Sleeper’s Beauport, had collections of accessories chosen for their color impact and light reflection.

Garden off dining room (HABS)
Outside, Mr. Dodge surrounded the house with elaborate, maintenance intensive ‘colonial’ style gardens designed by Edmund March Wheelwright, a Boston architect who summered on a nearby island.  An elaborate picket fence and entrance courtyard created a suitably elegant and charming approach.

Living Room, Added in 1926
Mr.Dodge intended to leave his beloved creation to the Society for the Preservation of New England Antiquities, now Historic New England, but the gift was declined for lack of endowment.  The family retained the house, and shorn now of two of its wings, it remains a private house.